Can You Live Without A Kidney?

Can you live with one kidney? Of course yes. However, it is slightly different from a person with two organs. Why some people have only one kidney? What diseases they are susceptible to and what they should avoid? You will learn all you need to know in this article. 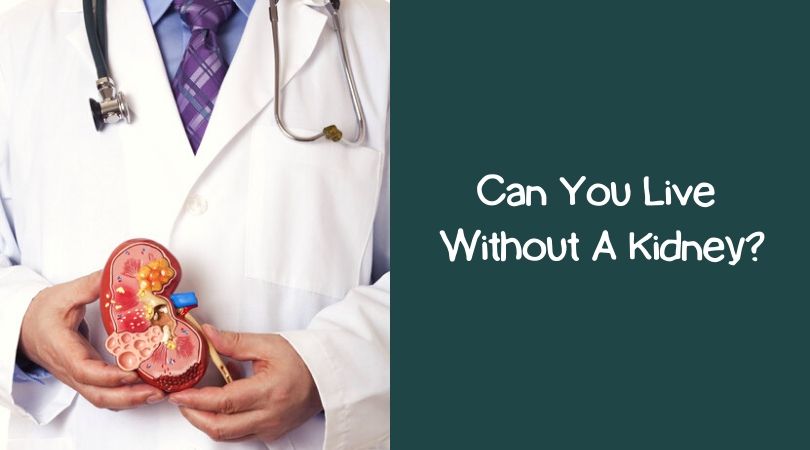 Life without a kidney: reasons

Kidney removal surgery may be required for diseases such as a large tumor, kidney failure, and a kidney injury that destroys the tissue that performs the work of the organ.

Do I need a second kidney at all?

The kidneys perform the most important functions in the body, however, people born with one kidney can live for many years without even knowing that they lack this organ. So do you really need a second kidney?

So, the kidneys work like a filter in our body. About 1,500 liters of blood per day pass through them. Blood is cleaned with a million microscopic filters from unnecessary waste products. If the kidneys do not cope with this function, then excess substances will accumulate in the blood, which will ultimately destroy the body.

The kidneys also maintain a balance of the volume of fluids and minerals in the body. Healthy kidneys actively remove excess fluid with water. If there is little moisture in the body, then the kidneys, on the contrary, redistribute the expenditure of fluid and protect it.

However, it is known that a person can live normally with one kidney. But just imagine that now all the functions that two kidneys carried out will be performed by one remaining organ.

Most likely, one kidney can cope with all of its duties, however, the body remains without a spare wheel. That is, the second kidney is actually needed as a supporting organ.

For example, a person may develop a lesion of a single kidney, and then acute renal failure occurs, which is severe, and ultimately the functions of the remaining kidney die out.

It turns out that the health of a single kidney needs to be carefully monitored: avoid contact sports (martial arts, football, hockey), physical activity, a large number of painkillers.

What are the challenges of living with one kidney?

One healthy kidney can work independently. In order to cope with its functions, it increases in size due to rapid cell division or the growth of the cells themselves.

The transplanted kidney also develops according to the same principle.

The absence of one kidney does not affect life expectancy. People have minor health problems (like all other people). Their blood pressure is slightly higher than normal, so they often suffer from hypertension in old age. But the main diseases are associated with the organs of the urinary system.

In the presence of these signals, you must immediately consult a doctor. In addition, it is necessary to undergo a full examination and take urine and blood tests once a year.

People with one kidney are allowed to play sports. They can choose the usual warm-up exercises, yoga, walking or running. And you can play team sports, such as soccer, only with the permission of your physician. It is also forbidden to engage in martial arts, karate, boxing and other types of wrestling.

Clinical experience indicates that the remaining kidney can quite cope with the amount of work only if it is healthy.

Do not forget that life after kidney removal does not end. Even if everything is in order with the second organ, it is worth waiting for a certain period of training and adaptation to new conditions.

Often, the compensatory process ends a year and a half after the operation. Pain after removing a kidney ceases to bother even earlier, and a healthy kidney gets used to its new responsibilities.

Nevertheless, it is always worth considering that during the compensation period a healthy kidney functions almost at the limit of its own capabilities, which is why it is extremely contraindicated to overload it physically, infections should be carefully avoided, and the drinking regimen should not be changed sharply. You must remember that a negative effect can have both excessive fluid intake and inadequate.

The postoperative period after removal of the kidney is characterized by a special diet.

In no case should you take uncontrolled medications and self-medicate. Hypothermia is extremely contraindicated. Legs should always be dry. Keep them warm, avoid contact with people who are carriers of flu, sore throat, or acute respiratory infections.

You can facilitate the work of the kidney by observing the correct regimen of sleep, labor and rest. Also, in no case should you forget about such a thing as a diet after removing a kidney. Regular nutrition deserves no less attention. The food accepted by the patient should be easily digestible, it should have enough useful trace elements and vitamins.

Nutrition after removal of the kidney should be balanced. It is recommended to include vegetables, honey, eggs, cream and sour cream in the diet. It is recommended to eat meat and fish in boiled form, try to prefer black bread. Drastic changes in nutrition should be avoided. For example, a sharp transition from protein nutrition to plant-milk food will negatively affect health.

Rehabilitation after kidney removal should be as smooth as possible. The abuse of preservatives, as well as salty and spicy foods, is highly undesirable. Do drink mineral water regularly since they contain too much salt, and one kidney will not be able to cope with their release. This will increase the risk of stone formation.

All recommendations after kidney removal should be strictly followed. Many patients hold the erroneous opinion that increased fluid intake or a complete rejection of salt will facilitate the functioning of the kidney, but in fact, if it is healthy, there is absolutely no need for this.

How long can I live without one kidney?

The most important question that future donors are interested in is: “How long will I live with one kidney?” Well, the removal of any organ is always a health risk. A number of clinical studies note that kidney donors are more likely to experience high blood pressure in the elderly. In 2010, a large-scale study was conducted in the United States among 80 thousand donors with one kidney. The data showed a higher mortality rate in the first 90 days after organ removal compared with the control group, however, in general, life expectancy with one kidney was exactly the same as in completely healthy people. If donors follow all the instructions of doctors, most of them are faced with a minimum of problems or do not experience them at all until old age. However, of course, any surgeon will always warn you about the risks of donation and possible problems with transplantation.

Can women have normal pregnancies with a single kidney?

Becoming a donor, you do not end your life. Pregnancy with one kidney is possible, however, at least six months should pass after surgery. As a rule, female donors feel well during pregnancy, however, there are higher risks of gestational diabetes, hypertension during pregnancy, preeclampsia (late toxicosis). After the donation, you will need to undergo a thorough examination by a nephrologist and have all the necessary tests, including a kidney function test and an ultrasound scan.

People can live a normal and full life even with one kidney. As long as the donor is regularly examined and follows the recommendations of the doctors, there should be no complications. When one kidney is removed, the second increases in size to compensate for the loss of functionality. In general, kidney removal affects a person’s health and well-being. In particular, you will have to limit your physical activity. Training is still important and useful, but contact sports should be abandoned. Martial arts, boxing, basketball, hockey, football are no longer suitable for you. In addition, the donor is recommended to be constantly under medical supervision. This means that at least once a year you will have to undergo an examination: general urine analysis; blood pressure measurement; glomerular filtration rate test (GFR analysis).

You will definitely have a scar, the size will depend on how invasive the operation was. In numerous studies in the United States, donors complained of pain at the site of kidney removal, nerve damage, hernia, and intestinal obstruction. Apparently, these long-term risks after donation are rare, however, no country in the world has comprehensive statistics on them. It is also known that people with one kidney are more likely to suffer from high blood pressure, proteinuria (protein in the urine), decreased kidney function (which is obvious). You should discuss these risks with your transplant team and request statistics on these issues that are specific to the center.

A hospital stay varies depending on the donor’s health status and type of surgery: traditional removal with a large incision against kidney laparoscopy. Usually, hospital treatment takes from 4 to 6 days. However, if we are talking about a surgical incision, then most likely the recovery will take longer – up to two weeks.

After kidney removal, the donor usually suffers an itch and soreness at the surgical site for several weeks. However, recovery after kidney removal usually goes smoothly if a person follows all the recommendations of the transplant surgeon. Do not lift weights. Try not to disturb the wound and wear a bandage. Avoid stress and take more walks. Take control examinations every two to three months.

Why people with one kidney must be cautious?

People with one kidney do not have any problems. But it can be compared to a bike without a spare tire. If you have no second kidney and a single kidney is suddenly damaged, acute renal failure occurs.

Acute renal failure can cause many problems and complications and requires immediate attention. Over a short period, the severity of symptoms increases and can cause life-threatening complications. Such patients need urgent dialysis. To avoid damage to the kidneys and their consequences, reasonable precautions should be followed by all people with a single kidney.

In which case is there a risk of sudden damage to a single kidney?

Potential circumstances for sudden and serious damage to a single kidney include:

How to protect one kidney?

People with one kidney do not need treatment. But it is important to protect a single kidney. Precautions include:

When should a patient with one kidney see a doctor?

A patient with one kidney should see a doctor immediately in the following cases: